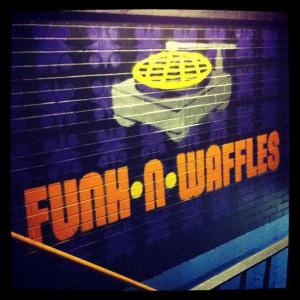 Funk ‘n Waffles is one of those places in Syracuse that has an aura of mystery to it. I have to admit, the first time I went I was a bit intimidated. It seemed like everyone knew what they were doing, like they had been there 100 times before. I on the other hand, have lived here for almost my entire life and I somehow had just heard of it recently. Upon arriving, you walk down the ally by Chucks and down some steps, into what looks like a seedy basement. It was at first very off-putting, I have to admit…I was a little scared. But when you walk in, you’re greeted with a comforting cafe style restaurant with a lot of art and character smushed into the confines of the small space.

On the weekends, the line will be wrapped around the restuarant with people waiting to get a famous waffle. The waffles come in a variety of options. You can get a sandwich, you can get one plain, you can get savory toppings or meaty toppings. Their menu is diverse in flavors and size. When I went I had an egg sandwich, and let me tell you… I have not stopped dreaming about that since I had it. It was so good.

BUT. The really COOL thing about Funk N Waffles, besides their food, is the local talent that comes in and out of there. It’s rare you find a place that many people associate with breakfast having live music throughout the week, or being open late night. Their hours are a little weird…they’re closed on Monday’s & Tuesday’s, but if you follow them on facebook you’ll get the inside scoop on what their hours are and what events they have going on throughout the week.

Every day they have something different, they have an open mic night, live music, charity events, art shows (they just revealed a new mural!), and so much more. I really dig the diversity Funk N Waffles brings to Syracuse.  The atmosphere is very laid back, it’s really refreshing to go there.

Tip: Ordering goes really fast, so have an idea of what you want before you get there.